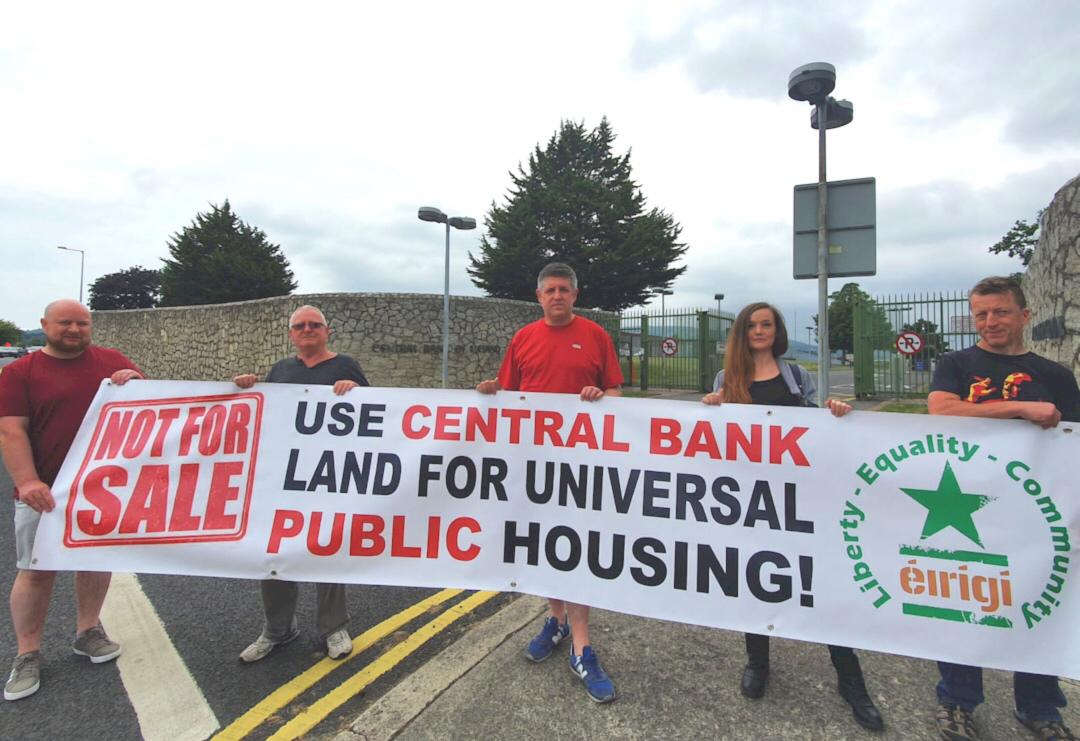 Éirígí activists yesterday unveiled a banner outside of the Central Bank facility in Sandyford calling for the site to be used for the construction of Universal Public Housing.

The group say the display was organised in response to recent media reports suggesting that either part, or all, of the 37 acre site is to be sold by the Central Bank.

“The Central Bank recently wrote to DLR to request that the residential zoning of their Sandyford facility be maintained.

“As part of that request the Central Bank outlined that it is actively considering selling off some or all of this 37 acre site.

“We are here today to highlight the fact that this land is potentially going to be sold off to a private developer or vulture landlord and to demand that it is instead retained in permanent public ownership.

“This site is ideal for development as a flagship Universal Public Housing development.  It’s within walking distance of the Sandyford Business District, Dundrum Town Centre, local schools and many other facilities and resources.  And for those who need to go further afield it is well connected to transport links including the M50, LUAS and bus routes.

“It could easily accommodate over 1,000 new homes as well as new community facilities and new recreational areas – 1,000 permanently affordable homes for local people from all income backgrounds who are currently being denied access to secure, affordable housing.

“We are in the middle of the worst housing crisis in the history of the state – a crisis that is being fueled by the chronic lack of public housing.  It is almost beyond belief that a state agency would be even considering selling off public land at this time.

“It’s now over three years since I first called for Universal Public Housing to be built on an unused eleven acre section of the Central Bank site.

“If DLR and the government had listened to that call, those homes would now be built and occupied by hundreds of families. Instead, that field is still lying empty and the housing crisis in this area is far worse than it was in 2018.

“Today I am calling on Catherine Martin, Neale Richmond and Josepha Madigan to come clean about what they know about the Central Bank’s plans for this land and for them to use their influence in government to block any future sale of this site to the private sector.

“Every TD in this constituency is a government TD.  They have nowhere to hide in relation to this land. They and the wider government simply cannot be allowed to squander this unique opportunity to dramatically increase the supply of affordable housing for the people of Sandyford, Dundrum and Ballinteer.

“In the coming weeks and months, we in Éirígí will be doing all that we can to build public pressure in relation to this Sandyford site and the failure of the government to provide public housing for all who need it.

“I’d encourage anyone in the Rathdown area who is interested in the fight for housing justice to get in touch with me.  Together we can replace the housing failures of the past with the housing successes of the future.”