Today is the centenary of the ratification of the Anglo-Irish Treaty by Dáil Eireann.

The vote passed narrowly, with 64 in favour and 57 against.

The Treaty had been signed a month previous by five Plenipotentiaries, two of whom had particular links to Dún Laoghaire.

Dún Laoghaire featured regularly in the life of the members of the Irish Delegation as the port of departure and arrival on the regular journeys between Ireland and England.

However, two of the five plenipotentiaries had much closer ties to the town – George Gavan Duffy and Eamonn Duggan. The first was the town’s first elected representative in Dáil Eireann and the last was later a key figure in local politics as the Chairman of Dún Laoghaire Borough Corporation.

George Gavan Duffy was born in England in 1882 and became a solicitor in London.

He first came to prominence when he acted for Roger Casement during the latter’s treason trial 1916.

Shortly afterwards, he moved to Ireland and became actively involved in Irish political life. He was a member of the first Dáil representing the Dublin South constituency.

Fluent in French and Italian, he represented Ireland at the Paris Peace Conference in 1919, and with this experience and his legal expertise, he was chosen by De Valera as one of the five Irish plenipotentiaries at the Treaty Negotiations in London, reluctantly becoming the last of these to sign the Treaty.

During the ensuing debates in Dáil Éireann, he spoke, reluctantly recommending the Treaty as he saw no alternative. 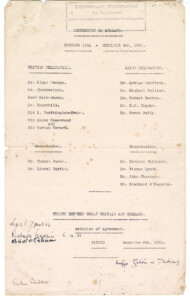 Gavan Duffy served briefly as Minister for Foreign Affairs but resigned from Government in 1922 and left politics the following year.

He returned to the legal profession, where he was both well-known and highly respected, becoming President of the High Court from 1946 until his death in 1951. Although no longer politically active, he was consulted extensively by de Valera over the drafting of the 1937 constitution.

Eamonn Duggan was born in Meath in 1878, and also became a solicitor, practising in Dublin.

Duggan was elected to the first Dáil as TD for Meath South.

During the War of Independence, while still working as a solicitor, he became the IRA’s Director of Intelligence until his second arrest in 1920, remaining in prison until mid-1921.

As with Gavan Duffy, De Valera appointed Duggan as a plenipotentiary chiefly because of his legal skills.

He was, however, more closely involved in the lead up to the mission having travelled with de Valera to meet Lloyd George prior to the agreement of the Truce in July 1921, which led directly to the negotiations. On conclusion of the Treaty, Duggan travelled immediately to Dublin with a copy of the signed document.

As a result, when the British team looked for a signed copy later that day, Duggan’s signature was taken from another document and pasted on to the second copy. A defender of the Treaty, Duggan remained as a member of the Dáil until 1933, when he moved to the Senate. From 1934, at that time living in Seapoint, Duggan was Chairman of the Dún Laoghaire Borough Corporation. He died, addressing a political meeting, in County Hall on 6th June 1936.

In addition to being fellow plenipotentiaries, George Gavan Duffy and Eamonn Duggan, shared a further singular honour in the history of the State.

At the first meeting of Dáil Eireann, on 21st January 1919, the Declaration of Independence was read publicly in three languages – in Irish by Cathal Brugha, in English by Eamonn Duggan, and in French by George Gavan Duffy.