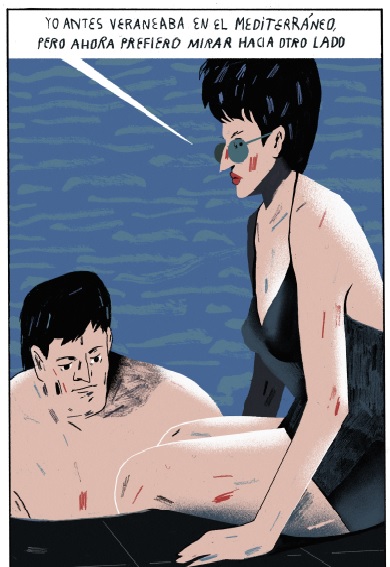 For lovers of comics, an interesting exhibition comes to Dublin via the Spanish Embassy’s Cultural wing Instituto Cervantes, Dublin – in collaboration with the Spanish youth institute, The Instituto de la Juventud (Injuve) Injuve and dlr County Council, will showcase 20 years of Comics, from tomorrow, Tuesday November 9, to Friday January 7, 2022 at dlr LexIcon.

Opening the exhibition tomorrow at 5.30pm, Dr Michael Connerty (co-chair of the Animation programme at IADT, Dún Laoghaire, where he teaches History of Film, Animation and Visual Culture) and the curator of the exhibition, Gerardo Vilches will discuss the works.

The Instituto de la Juventud (Injuve) created the Injuve Comics Awards at the end of the 1990s with the purpose of giving visibility to the projects of young artists who wanted to make comics an art medium with its own entity and specific formats, themes and techniques.

The Instituto Cervantes Dublin presented this exhibition at the Galway Cartoon Festival recently and will bring it to the LexIcon, Dún Laoghaire, in order to explore and promote the comic culture in Spain.

The exhibition showcases the artwork of the winners from the very first edition of the competition in 1998 up until 2018.

The curator of the exhibition, Gerardo Vilches, has selected one author per year and each chosen author is presenting two works (one from the past, which was awarded the prize, and a current one), so the spectator will be presented with the past and present of the Spanish comics creation through 20 authors and 40 works.