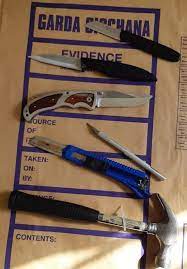 Plans to follow the Scottish model to tackle knife crime must be accelerated a Southside Fine Gael TD has said.

Dublin Rathdown Deputy Neale Richmond made the call in light of three stabbings in Dublin in the past 24 hours.

“Once again our capital has seen the vicious spectre of knife crime darken our city’s streets,” Deputy Richmond said.

“I know that detailed work is underway in the Department of Justice on how we can learn lessons from other jurisdictions.

“It is vital now the Minister accelerates the plans to follow the Scottish approach to tackling knife crime, investing in early intervention at a community level through education and preventative methods.

“The case for a knife amnesty, which has proven successful before, also grows and I’ll be asking the Minister to work with the Gardaí to implement this.

“Our brave gardaí also need to be given the resources to increase patrols through our capital city especially given more people are outdoors in the summer months.

“Some will call for tougher or mandatory sentences for knife crimes and these may be justified but often by the time it gets to that stage it is too late.

“Rather we must work to make sure knives are kept out of peoples’ hands and off our streets,” Deputy Richmond said.