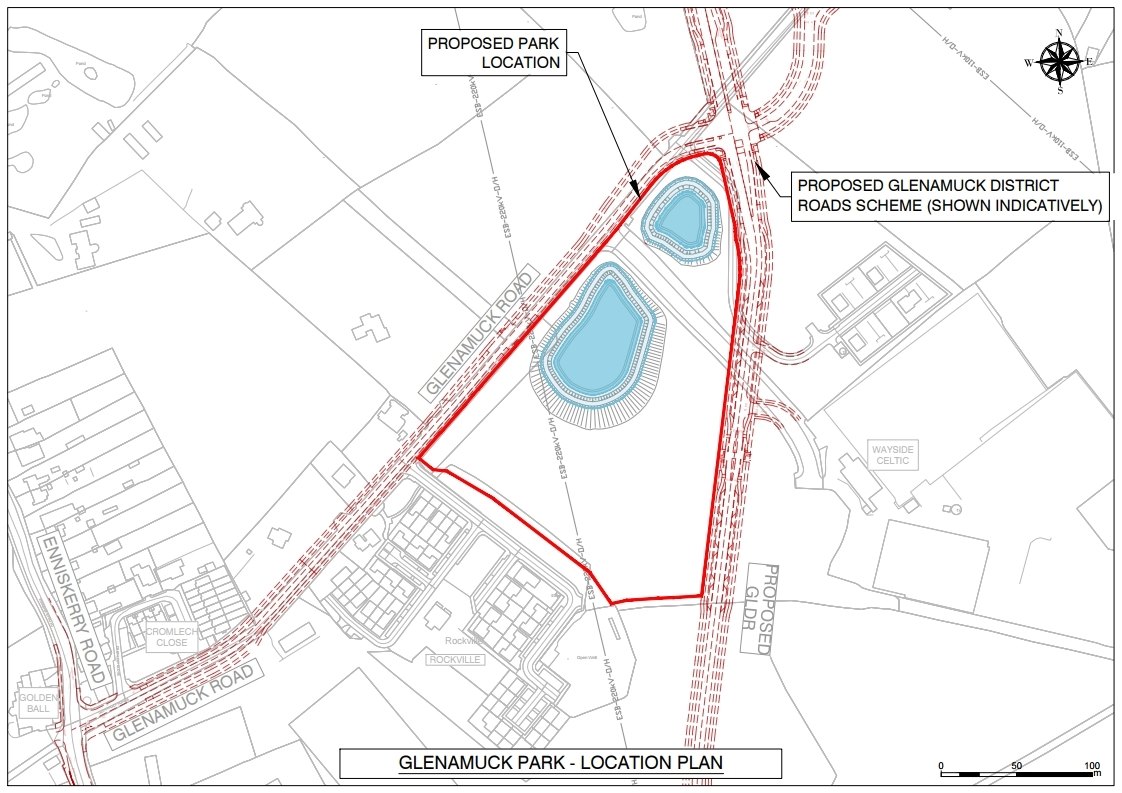 PLANS by Dun Laoghaire-Rathdown County Council to develop a new public park for Glenamuck have been described as a “sop” to appease local residents.

The park, which will be located between the Glenamuck Road and Wayside Celtic Football Club, will be developed alongside the GLDR, if plans are approved.

Public consultation has started on the proposed development of park and recreational facilities at Glenamuck Road South, including a children’s play area, kickabout area, water feature, footpaths, and benches.

However, many residents are questioning the wisdom of developing a park on a site that already has two electrical pylons.

Aileen Eglington, who is Chairperson of the the Kilternan, Glenamuck and Carrickmines Residents Association, says the proposed park is a ‘huge issue’ with local residents.
“People around here are not happy with the plans,” Aileen told Southside People.

“Why would you build a park with 210kv power lines running through it?

“Is this going to be safe for children playing underneath?

“Despite loads of negotiation between Dlr and Eirgrid for the past two years Eirgrid are refusing to go underground so it looks like the power lines are going nowhere.

“I think this park is a shocking waste of tax payers money.

“As well as the pylons there are also plans for a couple of attenuation ponds which will take up a large section of the site.

“I think what makes this most attractive for the council is the land wont cost too much as its between two roads so can’t be developed for housing.

“No developer would want it.

“This park is just a sop to appease local residents.

“Is this the best the council can do? We feel they could, and should, do much better.”

Southside People contacted Dun Laoghaire Rathdown County CounciI and asked them were they aware many residents aren’t happy with the decision to put the facilities in the proposed location due to the presence of a large pylon?

We also asked how much did the council plan on paying for this land.

A council spokesperson told us: “The proposals for a Park and Recreational facilities on Glenamuck Road are currently out to public consultation in accordance with Part 8 of the Planning and Development Act.

“The area of the proposed park is zoned in the County Development Plan 2016-202 and in the Kilternan/Glenamuck Local Area Plan (LAP) as Open Space/Recreational Amenity.

“The design of the Glenamuck District Road Scheme and now the proposed park have taken the pylon location into account.

“This public consultation is being undertaken in advance of the Council purchasing the land.

“Any purchase and subsequent development of this park would be a major commitment by the Council to the fulfilment of the objectives of the adopted Plans for the area.

“Plans and particulars of the proposals are available on the Council’s website https://dlrcoco.citizenspace.com/infrastructure-climate-change/glenamuck-park/