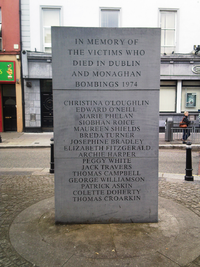 Remembering today the thirty three people who were killed and the hundreds who were seriously injured in the Dublin and Monaghan bombings of 17 May 1974, which saw the largest loss of life on a single day in the Troubles.

Four bombs exploded on the evening of May 17, 1974, three in Dublin City and one at a pub in Monaghan.

The attacks were coordinated in the middle of the evening rush hour.

The first went off at 17.28 on Parnell Street, followed by Talbot Street and South Leinster Street at two-minute intervals.

Around 90 minutes later the fourth bomb exploded at a pub in Monaghan.

47 years on the files held by the British government on the bombings remain under lock-and-key becasue of “national security” claims by the UK government.

The victims of the Dublin and Monaghan bombings…

Thomas Croarkin (36): Seriously injured in Monaghan and survived until July 24th, 1974, when he died in the Richmond Hospital.

Concepta Dempsey (65): Drogheda, seriously injured in Talbot Street and survived until June 11th when she died in the Mater hospital.

Collette and Baby Doherty (21): Dublin, was nine months pregnant when she was killed in Talbot Street.

Elizabeth Fitzgerald (59): Phibsboro, injured in the Talbot Street bombing, survived until May 19th, 1974.

Archie Harper (73):  Injured in the Monaghan bombing and died on the following Tuesday night, May 21st.

Marie Phelan (20): Originally from Waterford and living in Dublin killed in Talbot Street.

Peggy White (45): Monaghan town, injured in the bomb in North Road, Monaghan, and died on the night of the bombing.