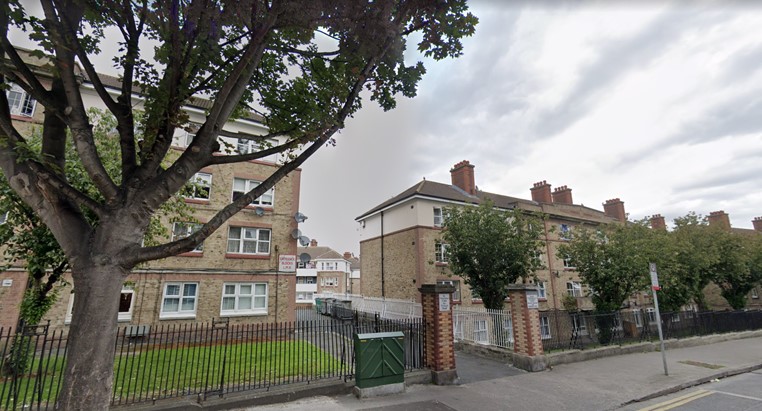 RESIDENTS of the Oliver Bond flats in The Liberties are living in “deplorable and unsafe conditions,” a local councillor has said.

Labour councillor Darragh Moriarty tabled a motion at last week’s Housing Strategic Policy Committee meeting calling on the council to undertake “an urgent environmental audit” of the complex as well as pay for any needed safety works.

His motion was accepted by councillors.

“Two weeks ago, residents of Oliver Bond launched their ‘We’re Sick of Waiting’ campaign and shared their experiences of the completely substandard living conditions they have to put up with,”he said.

“These conditions have been well documented for some time but now we have the statistics to back up what we’ve already known.

“83% of survey respondents said they are living with damp or mould and almost 70% said they didn’t have confidence in DCC to fix these issues.”

After repeated questions to senior Dublin City Council housing officials on this issue, Moriarty has been told that all issues must be dealt with on a case-by-case basis.

“It’s abundantly clear from how widespread this issue is that more proactive intervention is needed by Dublin City Council.

“Dublin City Council is the landlord and the people living in these awful conditions are public housing tenants,” he said.

“Plans in the pipeline for regeneration of the complex are hugely welcome, but we are talking 10, to even 15, years before this project will be fully completed.

“Residents living in these completely unsafe conditions can’t wait that long.”
Moriarty says that without an audit of the complex, “we have no idea of the damage we are doing to the residents, young and old.

“One resident has spoken about the extent of the damp in their children’s bedroom and that they have to sleep out in the sitting room.

“What long-term damage are these damp and mould conditions going to cause?

“What about the residents, who at huge personal cost, through credit union loans etc., have undertaken to patch up Dublin City Council’s mess? Will they be reimbursed?”

After the vote, senior housing officials say that they were committed to carrying out the audit but that funding for the works will be difficult to secure.

It will ultimately fall on the central Government to fund the project.

“A massive success story out of the flats in recent years has been the development of Oliver Bond FC, founded in 2016 but developing a number of senior men’s and junior kids’ teams in recent years,” he said.

“But the astro pitch in Oliver Bond where they would like to train more often is falling apart with actual duck-tape patching over some of the tearing up of the surface.

“Time and again, residents look at how their public realm and community amenities are left to rot and deteriorate, and they think their local authority doesn’t care about them.

DCC’s housing manager Brendan Kenny said that it will cost an estimated €60,000 to repair the pitch and would work with Oliver Bond FC to seek the funds.

“We have to fight that every day and send a message to the community we hear their issues and we’re working to resolve them,” said Moriarty.