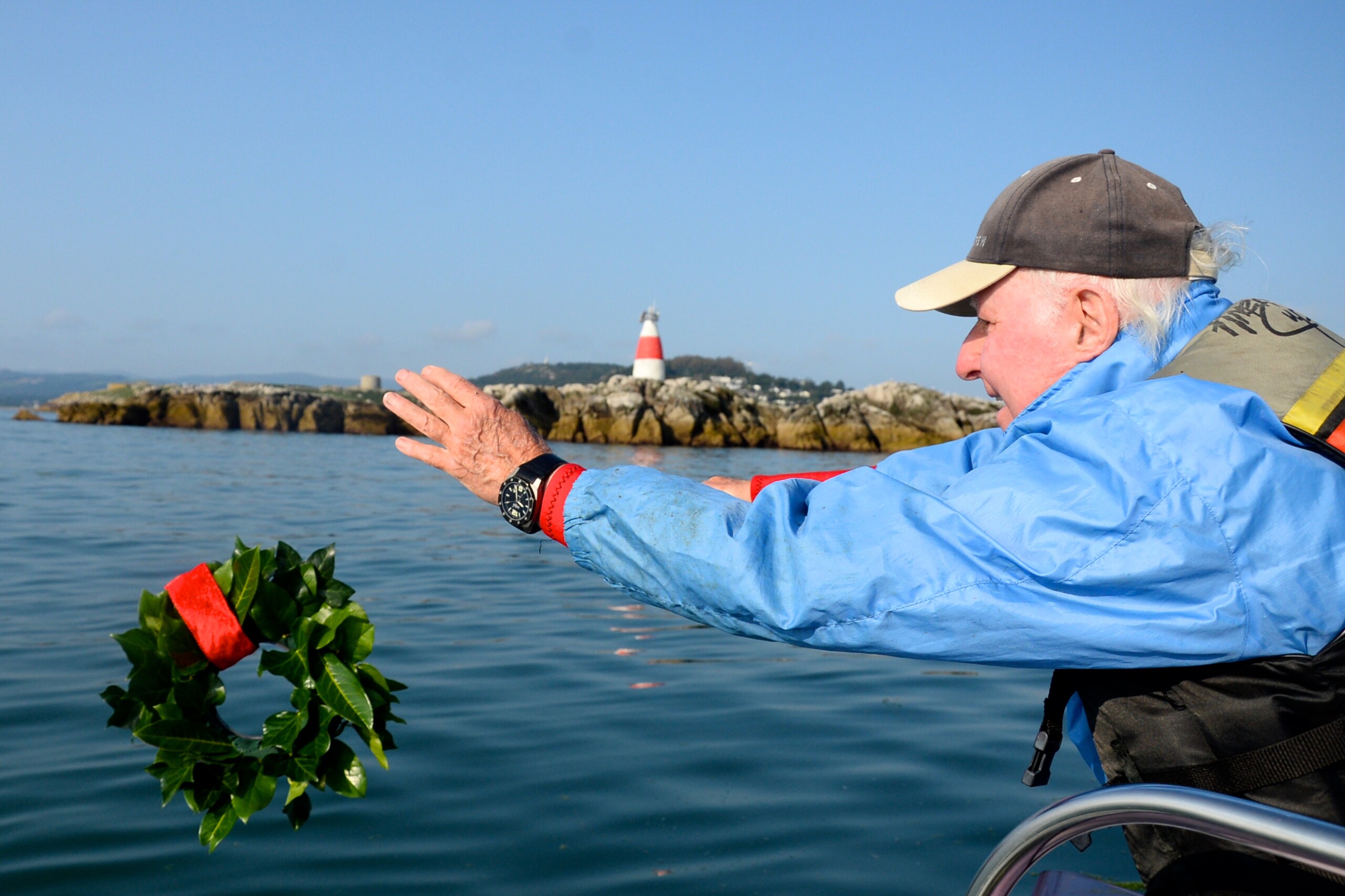 DALKEY resident Des Burke-Kennedy has released his self-published new book as we approach the November 1765 anniversary of a tragic saga which claimed the lives of eight innocent people.

He recently laid three wreaths in memory of Captain George Glas, his wife Isobell and their eleven year-old daughter at the Muglins rock just beyond Dalkey Island on the southern side of Dublin Bay.

At this exact place, the bodies of two of the family’s murderers were displayed for all to see following their March 1st 1766 trial for mutiny and murder in Dublin.

Des’ new 233 page book is full of fascinating details of what life was like for mariners and their families at that time, extraordinary adventures which started in Dundee in Scotland and continued off the coast of west Africa, the Canary Islands and the Caribbean, but most of all describes what one courageous man and his family achieved in their short lives as they risked all in what was a very cruel world.

In 1765, George Glass (Glas), his wife and daughter, were involved in a sensational mutiny off the south east coast of Ireland. Details were published widely in Britain, Ireland, the Canaries, America and beyond.

George was born in Dundee in Scotland in 1725. The son of Reverend John Glas, a Presbyterian Minister, his strict upbringing pointed towards a career in the Church.

That was not for him. Having studied as a Ship’s Surgeon, he joined the Royal Navy, became a merchant seaman and finally succeeded in financing his own ship to launch his career as a Privateer, in other words, an armed trader. During this period, he quickly became a wealthy man.

Privateering was profitable for those who survived. Escaping death on several occasions, he lost seven ships and was imprisoned seven times by England’s enemies on the high seas. Some regarded him as a Pirate – and a well-educated one too.

In 1764, he somehow found time to write an impressive ‘History of the Canary Islands’ Behind all the drama, George was driven by a secret ambition to establish his own trading harbour to be named Hillsborough.

This he discovered in Senegal on Africa’s west coast below the Canaries. All he needed now to make his dream and fortune complete were agreements from the local tribal chief and England’s Bord of Trade.

For some unknown reason, having secured the tribal chief’s agreement, he returned to Hillsborough bringing with him his wife Isobell and their ten-year-old daughter. This is where his family’s life was to change dramatically forever.

While moored at Hillsborough, George’s ship was attacked by natives. Half his crew were slaughtered. Short of supplies, rather than starve on board, he launched a small boat and sailed to the Canaries for supplies, leaving Isobell and his daughter and remaining crew on board.

On landing in the Canaries, he was arrested by the Governor, thrown in to a dungeon and almost starved to death.

His abandoned wife meanwhile lifted anchor in Hillsborough and miraculously also made it to the Canaries where she eventually secured George’s prison release.

They both decided that enough was enough, paid for a berth on the ‘Earl of Sandwich’ and set sail to England for Christmas 1765. Unknown to almost all on board, there was a vast fortune secured in Captain Cockeran’s quarters.

Four crew members set up a mutiny as the ship reached the Scilly Isles, murdered George, his wife and daughter and all five of the crew.

To avoid detection, they scuttled the Earl of Sandwich, loaded over two tons of gold, silver and jewels in to a small row boat and headed for the nearest shore – Wexford on Ireland’s east coast.

The four murderers set off all kinds of alarms as they made their way from Wexford to Waterford on horseback and up to the port of Dublin to try to escape back to England with their vast fortune.

Heavy drinking and loose talk in taverns made them easy to trace. Eventually, all four were captured, most of the treasure secured and they were sent for trial. Quickly convicted of murder and especially of Isobell and her young daughter, they were hanged.

The four corpses were displayed in public at Ringsend in Dublin Port to discourage other mutineers.

Two were buried close by later face down in the mud.

The other two corpses were then transported south along the coast to a gibbet on a rock known as The Muglins off the coast of Dalkey till seagulls had their fill.

Their remains may still be there today!

It is thought that Robert Louis Stevenson based his novel ‘Treasure Island’ on this sad family saga of Captain George Glass and his brave wife and young daughter.

‘Murder, Mutiny and the Muglins’, is available on Amazon and as a signed hardback at www.MurderMutinyandtheMuglins.shop