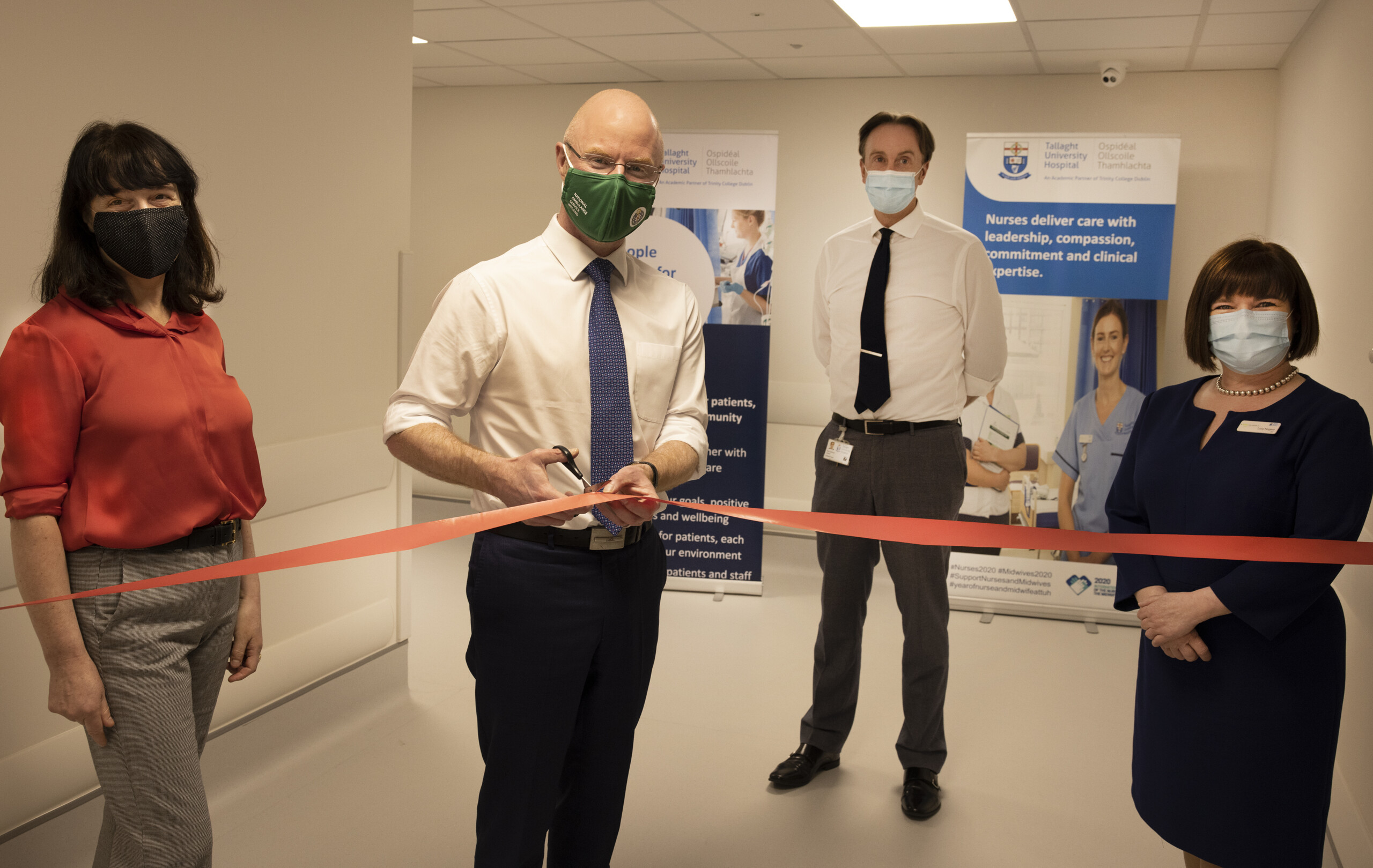 The 3,460 Sq M facility with four theatres and 25 recovery beds is located across the road from the main hospital, will eliminate long wait times for routine day surgery and increase elective day surgery activity.

The opening of the RDSC is part of an ambitious five year strategy for the Hospital which recognises the changing direction of health care provision across the country in respect of new infrastructure requirements, more community-based services and increased reliance on innovation, technology and research-led care.

The opening of the RDSC is an important step in the realisation of this strategy and is aligned to Sláintecare policy of separating scheduled and unscheduled care.

The Centre will eliminate long wait times for routine day surgery and improve access for patients and support the Hospital with the increasing demands of serving a growing and aging population.

The establishment of the centre was a joint project between TUH and IRES, building work began in October 2019 with the centre opening in December.

Commenting on the opening of the new Centre at TUH, Chief Executive Lucy Nugent commented:

“The past year is certainly one we will never forget!

“As frontline workers and individuals we have been presented with many challenges, the fact that we have had this facility available to us as Wave #3 of COVID arrived.

“The Hospital was at full capacity impacting on our ability to treat elective patients for daycase procedures.

“Despite delays due to lockdown and increased safety measures around ways of working, getting the project completed at a time of such challenge is an incredible testament to the entire team that worked on this project. This new facility will serve the patients and community well over the years to come as it goes some way in helping to address the continuing challenge of access at TUH.”

Speaking at the opening of the centre, Minister Donnelly said: “The new facilities being opened today are the embodiment of the reform being delivered by Sláintecare – this new infrastructure will provide Tallaght University Hospital with the ability to separate elective and emergency care and therefore the opportunity to dramatically reduce waiting lists, offering patients the right care, in the right place, at the right time. These new surgeries are just one small element of the considerable progress that has already been made with Sláintecare implementation.”

Laura Magahy, Executive Director Sláintecare said ‘One of Sláintecare’s key priorities is the achievement of minimum waiting times for people for their operations.  We were very pleased to support this new facility being officially opened today. It will go a long way to eliminate lengthy delays for routine day surgery, improve access for patients, and support TUH in providing high quality, safe and effective care for patients.’

Project Background
TUH provides national and tertiary services to patients from all over the island of Ireland. However, it is the Hospital’s immediate catchment area’s unique demographic profile that has the greatest impact on hospital services. In 1972 the Dublin County Development Plan saw Tallaght earmarked as a new town aimed at easing city congestion. This resulted in an influx of young families who are now aging collectively, leading to a predicted population growth of 322% in those aged over 75 by 2036. This is in stark contrast to the anticipated national growth of 105%. Some of the highest rates of growth are also in areas of high relative deprivation with a high incidence of chronic disease and a relatively poor primary care infrastructure.

Older people are higher consumers of health services, so these demographic changes will increase demand for these services. In addition, the 2016 Census indicates a population of almost 644,000 people in the three main areas served by the Hospital – South Dublin, Kildare and West Wicklow. This is an increase of over 31,500 in the last five years. Notably, Saggart and Rathcoole were the fastest and 2nd fastest growing urban settlements in the country.

With the planned construction of additional private and social housing schemes in the surrounding areas, this population growth will accelerate further. TUH was originally designed as a 650 bedded hospital but due to budgetary constraints at the time 120 beds were cut from the final build. Since opening, the Hospital has experienced ever-increasing demand for its services without a commensurate increase in capacity.

The Hospital’s forecasts suggest the average bed gap will reach 125 over the next five years. This presents a host of quality of care consequences most notably unacceptably long emergency and elective wait times. The Hospital urgently needs to develop both capacity and new ways of working in order to meet increased and more complex demands. Fortunately, unlike many other hospitals, TUH is not constrained on its 33 acres campus and is able to expand both horizontally and vertically as well as offsite becoming a “Hospital without Walls”.

The name of the new Centre is an acknowledgement of the Hospitals history, the Alice Reeves Dayward in TUH has traditionally been the location for day surgery.

With the move the surgical team decided to bring some of that heritage with them to the new building whilst also acknowledging the International Year of the Nurse & Midwife. Alice Reeves, began her career in the Adelaide Hospital, first as a Staff Nurse and then as a Ward Sister. She was subsequently appointed Matron to Dr. Steeven’s Hospital in 1918 and played a major part in establishing the General Nursing Council, which later became known as An Bord Altranais.