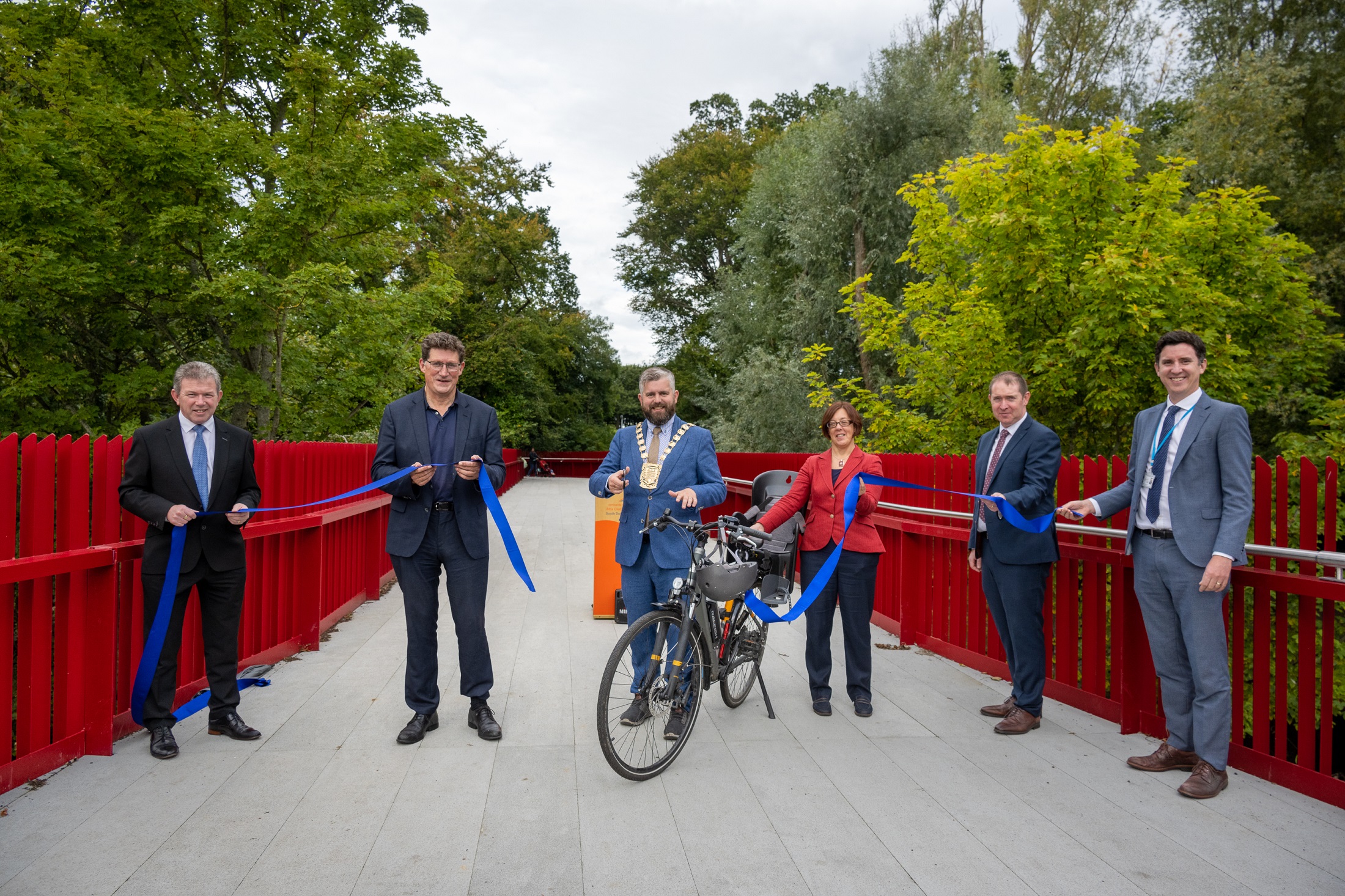 The Dodder Greenway, being developed to be a Greenway of International renown it is expected to be on par with the best greenways in the world.

Once complete, it is envisaged to be over 17km long, linking Sir Rogerson’s Quay in the City Centre to the entrance of the Bohernabreena Reservoirs at Glenasmole, South Dublin.

Although developed as a combination of off-road and on-road, it utilises existing facilities with the Dodder Valley as much as possible to connect the linear parklands along the route.

As part of the bridges phase of the Dodder Greenway initiative, South Dublin County Council has built three new pedestrian and cycle bridges, 750m of new pathway and 2.6km of upgraded paths.

This phase of the project cost approximately €5.8M and is being delivered by South Dublin County Council with funding provided by the National Transport Authority (€4.3M) and the European Regional Development Fund’s S&E Regional Programme (€1.5M).

The opening of the bridges is a key milestone in the overall Dodder Greenway vision to link Dublin City Centre to the Dublin Mountains via Ballsbridge, Milltown, Rathfarnham, Firhouse and Tallaght.

The South Dublin County section of the Greenway stretches from the Bohernabreena Reservoir in Tallaght to Orwell Park in Rathfarnham.

The Dodder Greenway represents a major new transport and recreational facility for Dublin, catering for both commuter and social cyclists.

The route takes specific account of the rich ecology of the area and is a combination of off-road and on-road cycleways utilising existing facilities within the Dodder Valley as much as possible and connecting the linear parkland along the route.

We have already seen a huge increase in the numbers of people using it for leisure, recreation and commuting and we have even small café businesses opening up along it. Once the whole route is completed it will be great for the whole of Dublin.

Approved by the Council’s elected members in April 2021, the ambitious Cycle South Dublin programme of work seeks to progress works on 260km of new and improved cycle lanes across the County.

Cycle South Dublin reflects the increasing importance of making cycling a realistic and integral part of how people move around the County and includes 63 projects.

Speaking at the launch, Minister for Transport Eamon Ryan said: “We celebrate the opening of the Dodder Bridges because they are vital pieces of a planned network of safe infrastructure. The Cycle South Dublin strategy is one of the most ambitious programmes for cycling in the country and will deliver a 260km network of cycle lanes connecting homes with the places people need to go on a daily basis.

By improving and expanding these facilities, we can ensure our cities, towns and villages are more connected and accessible while making sustainable travel a real alternative to private car use. That’s why we are investing €360 million per annum over the ten years to 2030, with a view to providing active and safe ways of travelling right across the country.”

Anne Graham, Chief Executive Officer, National Transport Authority, said, “NTA is delighted to have co-funded this phase of work on the Dodder Greenway. We worked closely with South Dublin County Council to deliver this scheme, which will make walking and cycling safer and more attractive for more people in this part of Dublin and beyond.

“The Dodder Greenway is precisely the kind of projects that we need to focus on as part of the effort to tackle climate change and provide an alternative to the private car.”

Dave Hennessy Assistant Director Southern Regional Assembly said ‘’ “Congratulations to South Dublin County Council on the successful delivery of the Dodder Valley Bridges and how they used EU funding from the ERDF S&E Regional Programme. Projects such as this are a great example of how our EU membership directly benefits our regions and local communities.”

Cllr Peter Kavanagh, Mayor of South Dublin County, said, “The Dodder Greenway is a fantastic piece of infrastructure that is going to link the Southern half of South Dublin all the way to Sir John Rogerson’s Quay when completed. It represents the future for many thousands of commuters here in South Dublin as we try and create a motile shift away from the private car leading to increased quality of life, better air quality and safer streets for everyone”