Following an extensive public consultation process, and a significant level of public support, at 70% of the responses,  Dún Laoghaire-Rathdown County Council plan to proceed with the Dún Laoghaire Summer Streets initiative, including the pedestrianisation of George’s St. Lower, which is planned to start on Monday 5th July at 11:00 am and continue until the 30thSeptember 2021.

An extensive public awareness plan is being implemented, including a detailed traffic management plan and diversion routes will be signed. 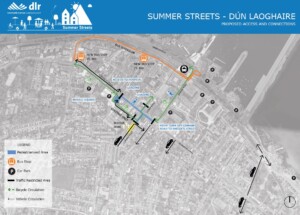 The initiative involves the reallocation of existing public realm spaces through the pedestrianisation of George’s St. Lower and the use of additional outdoor space at Myrtle Square.

A total of 1103 representations were received via the Council’s Citizen Space questionnaire, alongside email responses, Covid-secure on-site meetings and online briefings. 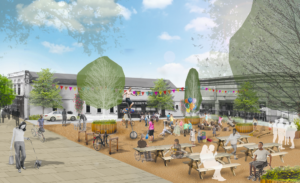 Working in partnership with businesses, residents and communities in our towns and villages, Summer Streets will allow people to move around in safety and comfort and allow diners to enjoy the outdoor dining experience, support local businesses and deliver an enhanced vibrancy to our streets. Actively enticing people back into the heart of our villages and towns will bring additional benefit to all retail businesses as well as the hospitality sector.

Over three-week consultation period, a wide range of stakeholders were consulted including businesses, residents’ associations, residents, disability user groups and community liaison groups, and these meetings included presentations and the provision of substantive consultation materials on the proposed trial scheme. This direct engagement supplemented the online consultation process. Further details of the consultation are provided in the submissions report.

It is noted that a number of respondents raised concerns and have had their concerns addressed during the consultation period. As part of the consultation process, each public engagement response was read and categorised against 16 categories, which are detailed in the submissions report. The vast majority of representations were supportive of the proposal.

Speaking of the consultation, An Cathaoirleach Cllr Lettie McCarthy said:

“The public consultation process in advance of this aspect of the dlr Summer Street initiative is a key part in how the Council want to engage with the public, with business and with local organisations. Their insight and opinion is always of importance in helping to ensure the success of new projects. I am pleased to see so many of the consultation respondents indicating their support and I am really looking forward to the transformation of Georges Street and surrounding streets this summer. Dún Laoghaire will be buzzing.”

In view of the feedback and comments provided by the public, a range of mitigation and enhancement measures will be integrated into the project, and this includes enhanced street cleansing and maintenance, detailed measures to manage traffic and optimise traffic flow, improved accessibility for all users, ongoing engagement with An Garda Síochána on traffic and community policing and a focus on animating and enlivening the streetscape, whereby street activities will be planned, managed and activated in collaboration with stakeholders.

The public engagement process on the proposed public realm interventions in Dún Laoghaire showed significant support for the proposals, with a large amount of positive suggestions put forward to help make the initiative success.  However, it is acknowledged that concerns were raised, and these concerns have been addressed to the greatest extent possible in the submissions report. It is planned to implement the scheme as proposed with the integration of additional measures detailed within the submissions report, with the scheme proposed to commence on 5thJuly at 11 am and running until 30thSeptember.

There will be an extensive public awareness plan implemented in advance of the proposed 5thJuly start date to advise residents, businesses and the wider public of the changes that will take place with regard to traffic layout, bus diversions, access and deliveries, enabling street works and events and cultural activities planned under the Dún Laoghaire Summer Streets initiative.