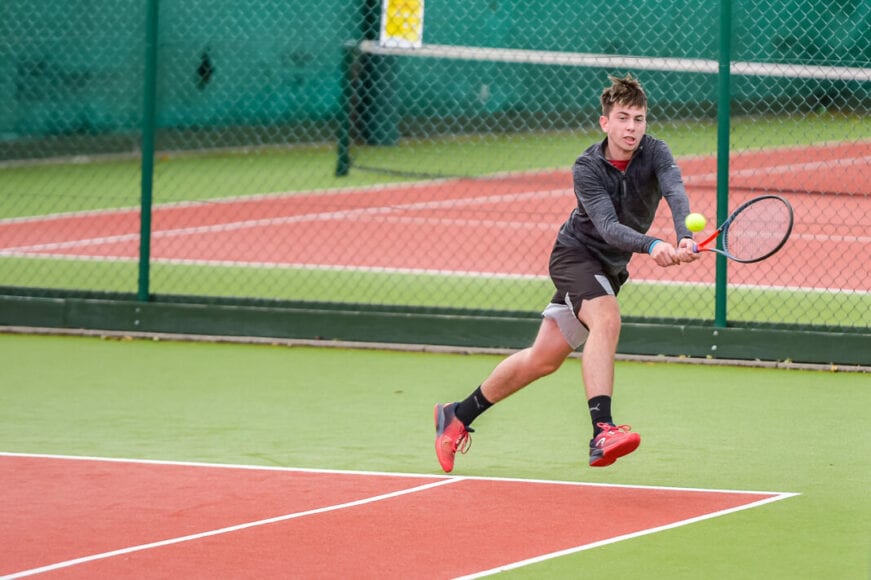 Monkstown Tennis Club’s Conor Gannon is looking to take his game to the next level in the US after he signed scholarship papers with the University of Tennessee.

The 17-year-old recently landed the national Under-18 championships but this opportunity has been in the pipeline for the guts of two years following a strong showing at the European Championships when he was in fourth year at St Michael’s.

As many as 70 US scouts were in attendance and a run to the fourth round make an impression with a number of top colleges getting in touch. Eventually, Tennessee won out with their Scottish coach James McKie – a fellow former rugby player – forging an affinity with the young Dubliner.

It has been quite the transition to the sport which vyed for Gannon’s attention alongside rugby for much of his life.

At Monkstown, under the tutelage of Stephen O’Shea, he won the national Under-12 crown but also ended up being more inclined toward the oval ball, playing in the JCT team in third year.

“I was a bit of a late bloomer! I was only really playing tennis once a week; I didn’t hate it but I just preferred being on a rugby pitch. Saturday I would have a match in the morning in St Michael’s and then head to DCU for four hours tennis training with the national squad.

“But that changed in fourth year. I love the challenge of tennis, mentally and physically, it was a different level for me. Now I play the odd game of tip rugby but I had to stop; I had to make that decision!”

The Euros was pivotal in seeing what was possible and he duly pursued tournaments on the ITF Futures tour, a real baptism of fire in the early days.

“That was tough; when you get out there by yourself, it’s like living on an island. The first couple of months on tour was really difficult. I lost a few first rounds and I had only been playing tennis full-whack for two months.

“In those first three months, I wondered is this for me? Losing all the time, having no ranking, getting bad draws, having to go to the lowest level tournaments.”

Things took an about-turn in February 2019, though, when he swept to a J5 singles title in Stavanger in Norway. He backed that up with further tournament wins in Belfast and Gjovik, Norway along with numerous semi-final runs.

“I don’t know what happened that Christmas when it all clicked. Everything changed from there, getting better draws with better rankings and went to better tournaments. It’s about self-belief.”

And it has given him the confidence to make a real mark when he gets to the US.

“There’s so much to conquer over there. I am not just going over for four years and then be done with tennis. I want to get better every day. A big goal is to become an All-American and make the last 16 of the national championships. That would be a big achievement.

“I also want to make top ten in singles and then in doubles. I am not going to put any limits on myself, just do the best I can.”

Ballyboden star uses for Rossies at 37 888011000 110888 Caroline Conway has dedicated to the Roscommon ladies squad for an additional period. The two-time All Ireland winner with the county becomes part of the panel under the brand-new Roscommon monitoring group led by previous Mayo All Ireland winning captain Diane O’Hora. Conway who plays her club football for Wanderers Ballyboden transforms 37 on Sunday and also has actually dedicated to the panel as they look for to win an initial All Ireland title considering that 2005. She is the only member of the 2005 panel still playing with the Rossies as well as she returned to the team in 2020 after a hiatus of more than a years far from Region football. Conway has had club success in recent times with Wanderers Ballyboden playing a leading part in their two Junior Championship successes in 2018 and 2019.

Hyland and Walshe in high gear

Cabo back up to 4th in First Department