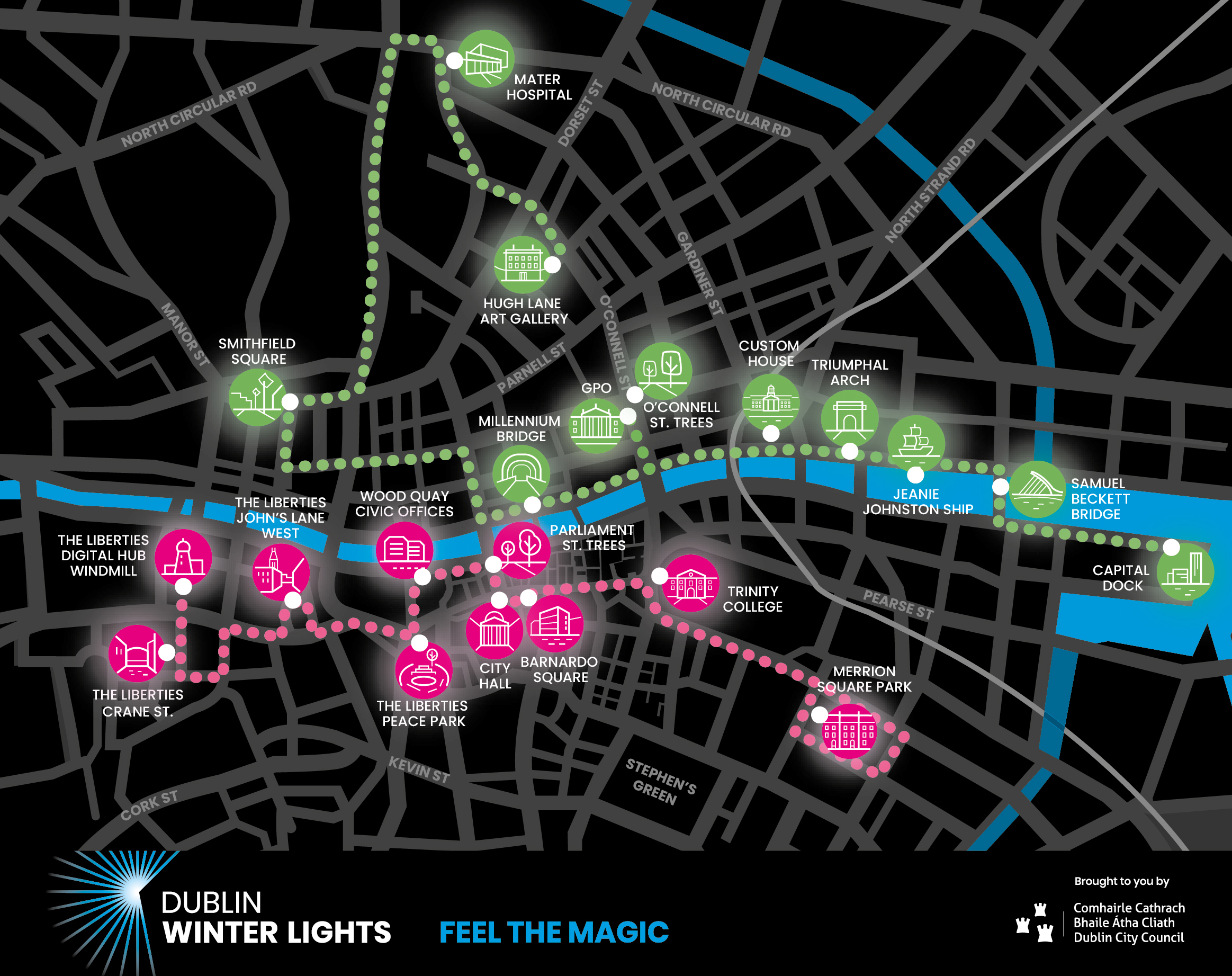 Dublin City Council has announced the return of the spectacular ‘Dublin Winter Lights’.

The lights were switched on last night and will remain on from now until January 1.

21 locations, in the form of 2 walking trails (see attached map), around the city have been transformed with colourful projections and lighting displays.

“The contrast between the bright lights and the dark evenings makes for a stunning backdrop to the city. I am delighted to see representative photos of so many of our community volunteers on the light sails of Smithfield Square.

“They really are the heart of every community. Our Childrens Wall on Barnardo Square will project entries from our recent ‘Dublin Winter Lights’ Art Competition.

“We all need a bit of colour in our lives so I would encourage Dubliners to visit the city-centre and take in as many locations as they can. I know that’s definitely something I’ll be doing this festive season!”

A team of over 60 people work to deliver ‘Dublin Winter Lights’ each year.

This year photos of 76 people who work voluntarily in their local community will be rotated on the sails in Smithfield as part of the programme. Examples of people featured include sports coaches, tidy towns volunteers, and charity workers who have been nominated by the 5 Area Offices and the Office of the Lord Mayor.

Simon Clarke, Dublin City Council Events Unit, says “5 new locations have been added to the list this year including the historical Liberties area, and we are delighted to introduce Merrion Square Park as a venue, the details of which will be launched very shortly, so watch this space.”

No diesel generators will be used this year. Instead where main power is not available we will use Hydrotreated Vegetable Oil (HVO) fuel. HVO is made from 100% renewable waste materials and results in an up to 90% reduction in CO2 emissions, up to 86% reduction in Particulate matter, and up to 30% reduction in Nitrogen Oxide emissions.

According to DCC the eco-friendly ‘Dublin Winter Lights’ features 157,800 low power LEDs, 100 tonnes of equipment and 15,780 metres of cable.

It uses the latest energy saving Laser Projection technology. The majority of the installations use LED powered lighting. There are three versions of the LED, 300w, 400w and a new 500w which is replacing what last year was 2500w.

The projectors we are using in Smithfield are new Laser Technology.

The 24 projectors being used are drawing a total of 13 amps which is the equivalent of a standard domestic socket.

Custom House power usage last year was 40kw whereas this year with LED we are down to 12kw power usage.

Samuel Beckett Bridge is completely LED using a total of 2kw (equivalent of a vacuum cleaner).

We recycle all materials and branding from year to year. We store all the lighting in wooden crates each year and don’t use any single use plastics.