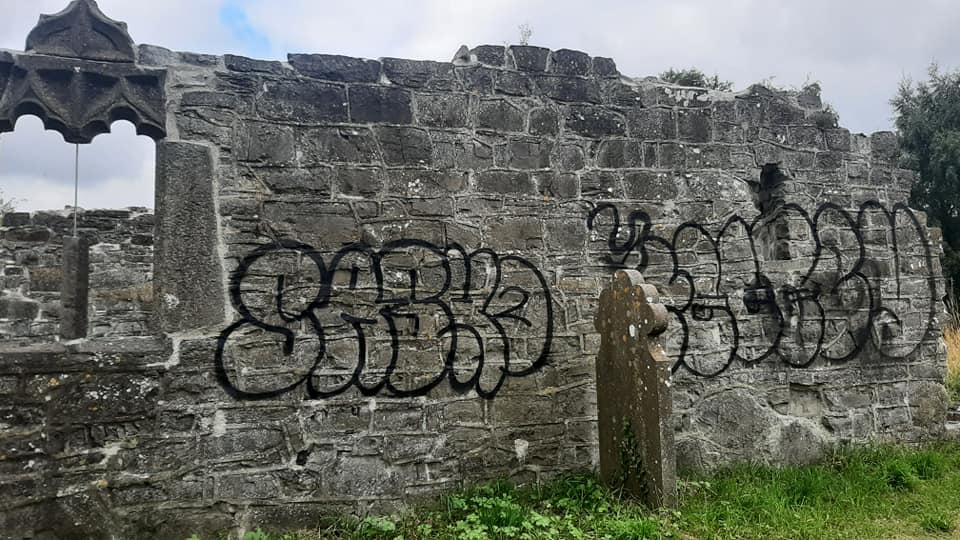 The recent graffitiing of St Finian’s Church in Esker has been widely condemned by local county councillors.

The church, which dates back to the 13th century, is a protected structure and in 2020 conservation works were undertaken to stabilise the ruin.

The church and adjacent graveyard are both owned and managed by South Dublin County Council.

“I like so many in the Lucan Community are simply appalled at what can only be described as an attack on local heritage and indeed the community itself.

“The daubing of graffiti all over St Finian’s is just unacceptable and I understand that the Gardaí are aware following a number of reports,” he says.

Ó Brádaigh says that the defacing of the structure is an “insult” to all of the volunteers who work to promote and protect Lucan’s and Esker’s historical significance.

“I was disgusted on learning of this, and I strongly condemn those responsible.

“Only recently the St Finian’s Church ruin underwent important restorative works that were very welcome by residents in Esker and the wider Lucan community and beyond,” he says.

“Indeed, there are local volunteers, history groups and societies that work tirelessly to promote Lucan for its wonderful historical interest.

“This is an insult and a criminal assault on that combined effort.”

Local Independent councillor said this type of graffiti is “vandalism” and is “not welcomed or admired by anyone – especially our volunteers who work hard all year round.

O’Toole said that SDCC has confirmed that it “will carry out the necessary repairs.”

Ó’Brádaigh said: “I immediately made contact with South Dublin County Council and have already received written correspondence committing to arrange for the removal of the graffiti.

“As an historic site/ruin, St Finian’s is a protected structure and will need specialised graffiti removal.

“In this regard the request for such works has been forwarded to a specialised contractor.

“Lucan has been awarded a tourism destination town status by Failte Ireland and only last week, I was delighted to attend a very informative briefing aiming to develop a tourism product and proposition plan making Lucan a more accessible and inviting location to attract tourists coming into Dublin.

“We are all guardians of our local heritage and as such, I would urge everyone to report any incidences of trespassing, anti-social and criminal behaviour within our communities. “