People Before Profit TD Bríd Smith, local branch members and supporters presented an open letter yesterday to Green Party Deputy Patrick Costello, calling on him to vote in support of the People Before Profit Climate Emergency Measures Bill, which is to be debated in the Dáil this week.

The Bill would ban new data centres, liquefied natural gas terminals and new fossil fuel related infrastructure during the period of the climate and biodiversity emergency. 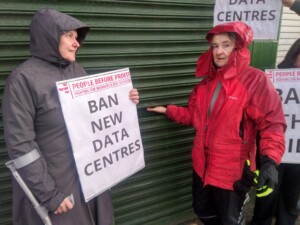 The open letter was signed by members of the public from across the constituency of Dublin South Central and was presented at Deputy Costello’s office in Inchicore on Monday evening.

There will be a rally at the Dáil at 5.30pm on Thursday 30th September when the Bill is due to be debated.

“We are calling on Deputy Costello, and his colleagues in the Green Party, to use their sway in government and back this Bill so that our national policy around data centres and fossil fuel infrastructure can be rational and sustainable,” Bríd Smith said.

“Anything other than full support for this bill from the Greens would represent a betrayal of the climate movement and an abandonment of Ireland’s climate targets and obligations.

“Dublin is the largest data centre hub in Europe. Each centre uses huge amounts of electricity and water, which is putting a serious strain on our supply.

“Already we are facing skyrocketing bills, energy shortages and blackouts this winter as a consequence.

“And this expansion of data centres will also mean we cannot meet our climate targets.”