The Crumlin Drimnagh branch of People Before Profit and supporters, along with TD Bríd Smith, held a housing protest with tents outside the Crumlin Area Office of Dublin City Council in Crumlin village last Saturday morning.

The group say the protest was to highlight the ongoing housing and homelessness crisis.

“There is serious anger about the housing crisis and it is not going away,” People Before Profit TD for Dublin South Central Bríd Smith said.

“Families suffering in extremely overcrowded situations, often with three generations under one roof. 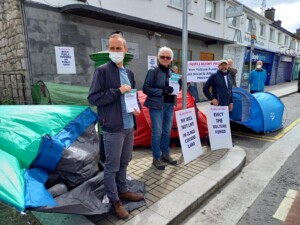 “People of all ages forced into homelessness, having done nothing wrong, being evicted by unscrupulous landlords who want to profit off rising property prices and rents.

“This misery has all been caused by the housing policy of successive Fianna Fáil and Fine Gael led governments.” 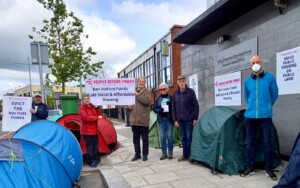 Deputy Smith also said the sale of public land to private developers has to stop.

“We need to fix this now.

“We need to ban vulture and cuckoo funds. We need real rent controls and tenants’ rights.

“We need to build public housing and to stop the sell off of public land and we need to tax vacant property which is being hoarded by speculators.”