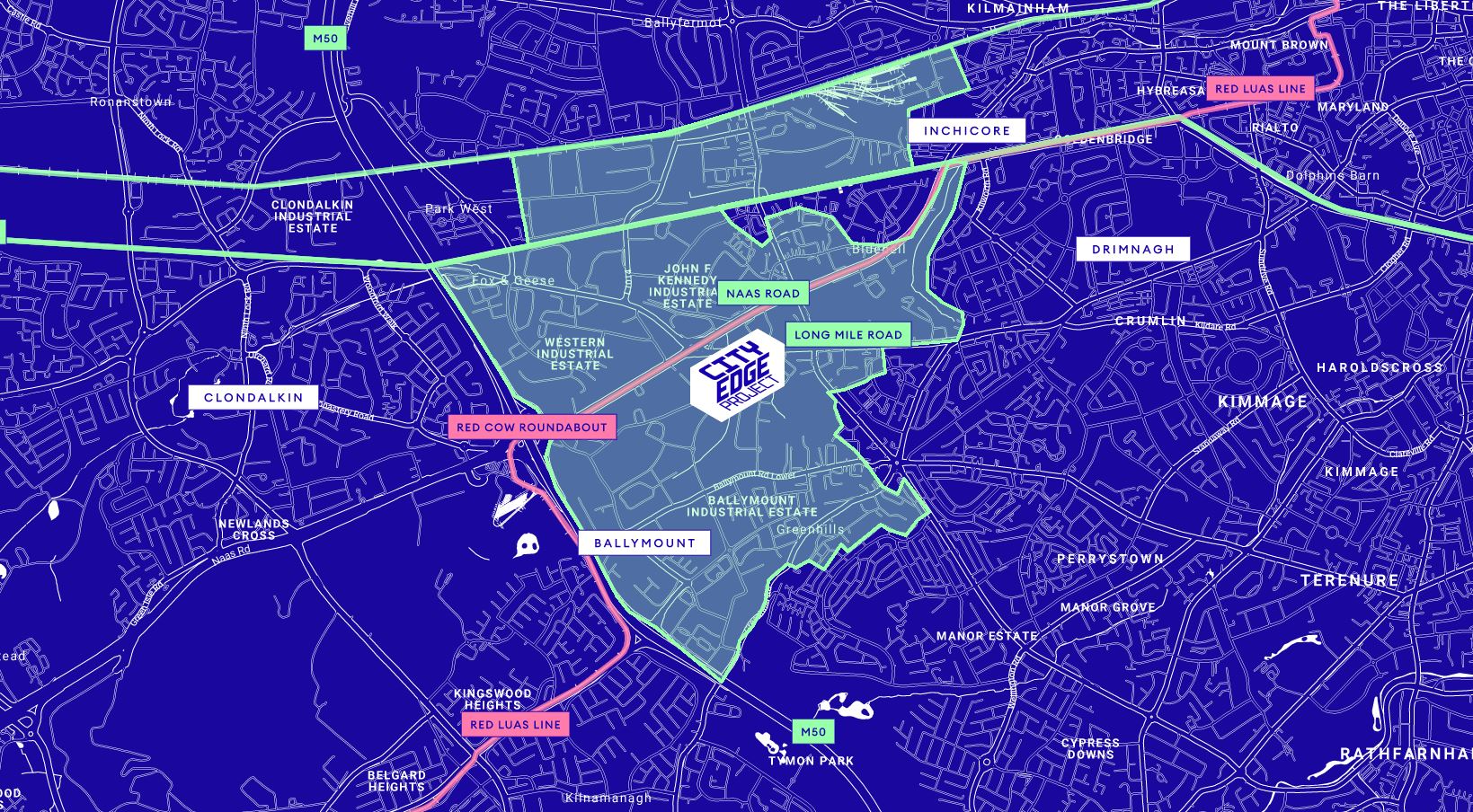 The live, online events, with Shane Coleman (Newstalk) as MC, will provide people with an interest in the City Edge Project with a unique opportunity to learn about Best Global Practice approaches to designing and delivering large scale regeneration projects, as well as more details about the vision for the project – one of Europe’s largest urban regeneration projects.

The City Edge Project is a long-term and extensive urban regeneration plan, jointly run by SDCC and DCC, of an area at the western edge of Dublin City Centre; 700 hectares of land encompassing the Naas Road, Ballymount and Park West locations.

The area – bigger than Dublin City centre itself – is already a cornerstone of the Dublin economy with some 1,500 businesses employing 25,000 people, alongside well-established residential communities of 5,000 people.

This part of the city could be further developed to support an attractive expansion of Dublin City and provide space for up 75,000 jobs and 40,000 homes.

The International Conference will be streamed live from www.cityedge.ie. Registration is now open on www.cityedge.ie for members of the public to join the event to find out more about the ambitions of the City Edge Project, ask questions and have their say.

The public event will be opened by the Minister for Housing, Local Government and Heritage, Darragh O’Brien. The line-up features a range of international and national speakers from Amsterdam, Copenhagen, Singapore, London and Dublin, all of whom have been involved in significant and successful urban regeneration projects.

Over the two mornings, they will share their experiences of placemaking and regeneration in high-density cities and speak about the lessons from their projects that could be applied to the City Edge Project. The proposed line-up is as follows:

Speaking ahead of his address on day one of the International Conference, Darragh O’Brien, Minister for Housing, Local Government and Heritage said:

“I welcome the work being undertaken by South Dublin County Council and Dublin City Council in their early engagement with the community and key stakeholders in developing a plan-led vision for the regeneration of the City Edge area of West Dublin.

“The development of brownfield land with good transport links for housing in our cities is a key part of delivering compact urban growth and increased housing supply.

“As well as having the potential to make a significant contribution to meeting our housing needs, this work will also ensure the provision of necessary economic, social and environmental infrastructure to support the development of well-balanced, sustainable communities.”

Roger Madelin CBE, Joint Head of Canada Water Development at British Land and former Director/CEO of Argent Group PLC, UK, is providing the opening address for day two of the International Conference. He said the time invested in this consultation phase is invaluable:

“The amazing opportunity presented with the City Edge Project could not come at a more important and urgent time. There will naturally be earnest voices eager to press on soonest to solve the housing crisis or to solve the climate crisis; there will also be voices of scepticism about any talk of doing things better, about genuine consultation and shared wider visioning.

“From my very lucky experiences of leading major projects in Birmingham, King’s Cross and now at Canada Water, time invested in listening to a wide audience, listening to the existing communities and business, learning from other cities, setting out a clear and unique vision and building a strong consensus is the essential foundation of success.

“After that, putting in place clear and strong policies to ‘guide, encourage, frame and enforce’ the delivery of change, will catalyse the much needed results.”

“This joint SDCC & DCC consultation programme is to provide ample opportunity for any member of the public to get involved, contribute, and help shape this potential and major regeneration project for this important part of the city for future generations.

“Similarly, our unique International Conference events are about showing the potential of the City Edge Project and inviting experts, who have done this elsewhere in the world, to input into the overall vision for the project.

“We want City Edge to be a place where people truly want to live, work and socialise and we want members of the public to be part of designing it, so that it meets their future needs in terms of housing, employment and transport, is best for the environment and addresses climate action.”

Also, on the evening of the September 30, members of the public can join a live online Presentation with Q&A and in just over an hour they will find out about the details of the project and what the project team is trying to achieve.

Members of the public and stakeholders can also review the City Edge Emerging Concept Plan and have until midnight on the 6th of October to make a submission at www.cityedge.ie, as part of the non-statutory 4-Week Public Consultation for the project.