Young people from Ballyogan unveiled their new DIY hangout space after creating and designing a structure over the summer months.

“Despite being in the middle of a pandemic the young people decided with Rosi Leonard, Youth Creative Engagement Worker, to create a positive, colourful structure that they and their friends could use to meet up when they couldn’t do so indoors,” says a spokesperson for Dun Laoghaire-Rathdown County Council.

Local children and teenagers were involved in all aspects of the build project, from designing, cutting, assembly and even built some furniture. 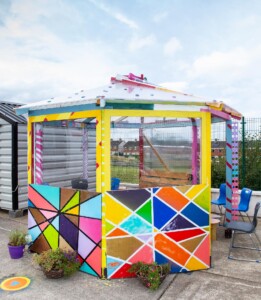 An Cathaoirleach of Dún Laoghaire-Rathdown County Council, Lettie McCarthy said: “This fantastic project is an excellent example of the positive outlook of our young people throughout the pandemic and their creativity; well done to all involved.”

SDCC agrees to employment inspections on construction sites in the county

Local TD says ‘up to €14,000 rental income exempt from tax under rent-a-room relief’